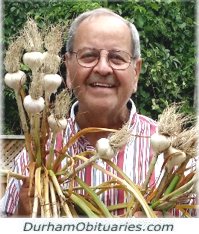 HUK, Steve  - On Thursday, August 2 2018, Steve Huk passed away in Lakeridge Health Oshawa at 80 years of age with his wife Tania (nee Koreshenkov) by his side.

Steve is survived by his wife Tania, sons William Boris (Hedy) Huk and Nicholas John (Anna) Huk, by his grandchildren Victoria, Sebastian, Isobel, Julia, Matthew and Chloe, and by his sister Stella Morash (Peter), his sister-in-law Wanda and nieces Stella, Mary-Anne and Ann.

His mother Agnes, father William, and brother John predeceased him.

Steve was born in Sydney, Nova Scotia on August 26, 1937. He had a lively and fun-filled childhood in a close-knit Ukrainian community. Though he began his working career as an electrical apprentice he soon joined the Royal Bank of Canada where he was employed for 37 years. He held positions across Canada, in the United States, in the Bahamas and in other international postings before finally settling in the Greater Toronto Area in 1977. Steve retired in 1994 and enjoyed a lengthy retirement with his family and his cherished grandchildren.

Steve was a proud member of the St. George’s Ukrainian Catholic Church community where he was a founding member of the building committee and the men’s association. He also volunteered with the Big Brothers Association and the Sunrise Kiwanis Club.

Steve loved the outdoors and was an avid fisherman and sportsman during his active years. His recent health struggles curtailed his participation in these activities, but never stifled his trademark wit.

The family would like to thank Dr. Francis Kwan for his years of excellent care, and the staff at Lakeridge Health Oshawa for their compassionate treatment at the end of Steve’s life.

Steve’s funeral was held on Wednesday, August 8th at ST. GEORGE'S UKRAINIAN CATHOLIC CHURCH, Oshawa. His remains will be interred in the family plot in Cape Breton.