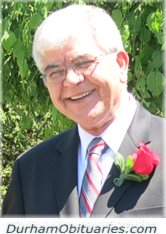 His daughters, Diana and Lisa, were by his side every step of the fight.

Guy was an eccentric man with a giant heart and a brilliant brain.

He left us too soon, but not without sharing his vast knowledge with those whose lives he forever touched.

Although he spent many years writing code as a Systems Analyst, he lived his life as a teacher of many subjects: soccer, advanced sports scheduling, wine-making, and drywall (just to name a few).

He was born in Lago, Cosenza, Italy to Assunta (Nacaratto) and the late Carmine Bruni on an unknown date* in February 1950. They walked to the Registration Office on February 11 – the date that would forever be known as Guy’s birthday. Guy’s pride for his Italian heritage remained strong since that day.

Guy and his parents immigrated to Toronto, Ontario in 1954. In 1964, the family (which then included siblings, Enzo and the late Ida) moved to Scarborough, where Carmine and his brother started “Plaza Restaurant & Pizzeria.” Throughout his teenage years, Guy worked at the family restaurant as a pizza-maker alongside his dear friend, the late Luigi D’Amelio.

In 1977, Guy married the love of his life, the late Assunta “Sue” Canonico, daughter of Mariano and Ottorina. They were family friends from Lago, who immigrated in 1956. If you asked Guy, he would tell you that one of his fondest memories was when Ottorina gestured toward Sue and whispered to him, “Questo è per te” (“This one is for you”). Guy was only 13 years old and had no idea at the time that he would later inherit another brother (Angelo) and two more sisters (Franca and Sandra).

From 1982-1985, and with the help of family, Guy built for Sue the perfect house in which to raise their daughters. Guy continued to live in the house until his very final moments. We suspect he is now reunited with his love at long last.

Guy’s legacy lives on through Diana and Lisa, who respectively inherited his handyman skills and inappropriate sense of humour. His legacy also lives on through his grandson, Elliott, who inherited the fastidiousness of his beloved “Nonno Grumps.”

In addition to the above-mentioned individuals, Guy will be sorely missed by his sons-in-law, Philip Beaudette (Diana) and Greg Walsh (Lisa), Josephine Pelingon, and Guy’s aunts, uncles, nieces, nephews, cousins, godchildren, friends and neighbours. Guy loved his people fiercely and would have done anything to help them out in a pinch.

Please join the family for a celebration of Guy’s life on Saturday, August 25 from 2:00 – 5:00 at BARNES MEMORIAL FUNERAL HOME in Whitby. An open-mic ceremony will begin at 4:00. Anyone who wishes to share a brief memory of Guy is encouraged to do so.

In lieu of flowers, and in honour of Guy’s love for kids, please consider donating to the Grandview Children’s Centre in Oshawa.