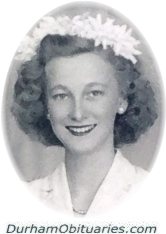 EASTWOOD, Mary Elizabeth  - Passed away peacefully at Milton District Hospital on August 17, 2018, lovingly surrounded by her family. Mary was in her 93rd year.

Predeceased by her sister Sally Dennis.

Memorial donations in Mary’s memory would be appreciated and may be made to The Salvation Army.

Online condolences may be made at  wctownfuneralchapel.com.