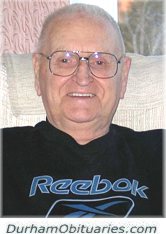 Passed away peacefully at Lakeridge Health Oshawa on Saturday August 25, 2018 in his 94th year.

Glenn was predeceased by his wife Lydia (2003).

He is survived by one brother, Murray (Joyce passed) and predeceased by brothers Clarence (Dora), Llewelyn “Bud” (Thelma), and Don (Minnie).

He will be missed by many nieces and nephews as well. Glenn was born and raised in Pickering/Ajax and later moved his family to Whitby.

In retirement Glenn and Lydia moved to the Oshawa area.

Glenn worked at a variety of jobs including helping to build the 401 Hwy before joining General Motors.

Glenn and Lydia enjoyed many years of traveling in their motor home throughout Canada and the U.S.A.

Glenn will be cremated and laid to rest with his wife Lydia at Salem Cemetery during a private family interment.

Friends and family are welcome to attend.