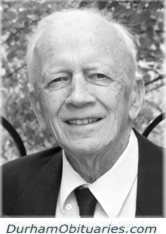 MASON, Michael A.  - Michael A. Mason of Brooklin, Ontario (and formerly of Kingston) died August 29, 2018 in the Palliative Care Ward of Lakeridge Health Centre, attended by loving family.

Michael was a husband, father, grandfather, great-grandfather and dear friend; a navigator in the R.A.F.; a professor of English Literature (B.A. Honours, Dip Ed., M.A., P.H.D.); a poet, playwright and children’s author; and a generous, kind and decent man of deep Christian faith.

Michael read widely, with a special interest in British drama, the Victorian novel, English history and detective novels. He was proud of Muriel’s beautiful paintings, and generous in his support of his sons’ and grandchildren's educational explorations. He finished his teaching career as Head of English and Philosophy at the Royal Military College of Canada.

Michael is survived by his wife Muriel, his sons Paul and Robin, Robin’s wife Angelina and Paul’s fiancée Nathalie, his grandchildren Rachael, Nina, Alex, Mike, and Matthew, his step-grandchildren Molly and Jackson, and his great-granddaughter Gillian. He was delighted to see Rachael and Nina announce their engagements to Fernando Cortes Nila and Patrick Brown.

Before all else, Michael was a family man: his love for his wife, his sons and their families was a warm light in the cold and darkness. It will never go out.

Funeral service will be held at St. Thomas Anglican Church Brooklin on Saturday September 8th at 1:30.

In memory of Michael and in lieu of flowers, memorial donations to the MS Society would be appreciated by the family.