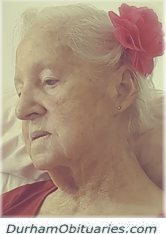 Christina was born in Dublin, Ireland on December 19, 1924 to the late Elizabeth and John Patrick Burke.

She is survived by her daughter Joan Golden and son Rick Noble and the late Judith Row.

A funeral mass will be held at ST. JOHN THE EVANGELIST, 903 Giffard Street, Whitby on Thursday September 27th at 11:00 a.m., followed by inurnment at Pine Ridge Memorial Gardens, Ajax.

Donations in memory of Tina to Rose of Durham may be made through MOUNT LAWN FUNERAL HOME, 905-443-3376.