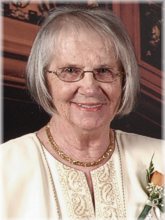 Ruth was a seamstress and insurance underwriter until 1964 when she focused on raising her son Wayne.

Ruth later worked in her sons R&D company as an administrator, bookkeeper and technician 1978-2001.

Ruth, a devoted wife, mother and grandmother (Oma) loved to garden, sew, cook, camp, fish, boat, do Judo, do crafts and spend time indoors, outdoors and travelling the world with family and friends.

A celebration of Ruth's life will be held at: The Oshawa Golf Club, 160 Alexandra Street, Oshawa, Ontario, on Wednesday, September 26, 2018 starting at 6:30 p.m., Service at 7 p.m., refreshments and sandwiches served thereafter.

In lieu of flowers, if desired, donations in memory of Ruth may be made to 151 Chadburn Squadron, Royal Canadian Air Cadets, Oshawa, Ontario (www.chadburn.org/donate; Click "add special instructions to the seller" and insert the words "In Memory of Ruth Conrad" followed by your name as the donor). The family will be given a card with the donor names.