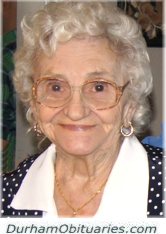 KWIATKOWSKI, Stanislawa Honorata (nee Bogacz)  - Beloved mother, grandmother and great grandmother passed away peacefully with her family by her side on Thursday, September 20, 2018, three days shy of her 91st birthday.

She married Czeslaw (Chester) Kwiatkowski September 1, 1946 in Germany where their first two children, Reg and Joe were born.

In May of 1951 she emigrated to Madsen, Ontario with her sons to join Chester who had come ahead to find work and establish a home for his family.

Shortly after, a third son Henry and a daughter Krystyna were born in the nearby town of Red Lake. In July of 1965, due to closure of the mine in Madsen the family moved to a new home and new life in Oshawa.

With her talent in preparing Polish food Stella found work with Bunny’s Catering where for a number of years she worked closely with many of her friends. Her love of cooking her favourite Polish dishes was always loved and appreciated by her family.

Stella had many passions in her retirement. With her green thumb she would tend to and nurture her many beautifulflowers and large plump tomatoes.

She was also talented at knitting and crocheting where she would often make things without a pattern. Stella also very much enjoyed shopping and travelling to Poland to visit her family. Stella is survived by her four children; Reg (Fran), Joe (Danuta), Henry (Anne) and Krys (Dan).

She will be truly missed by all.

A funeral service will be held at THORNTON CEMETERY and  FUNERAL CENTRE, 1200 Thornton Road North, Oshawa, (South of Taunton Road and off of Dryden Blvd, 905-579-6787) on Friday, September 28, 2018 at 11am with visitation one hour prior and a reception to follow.