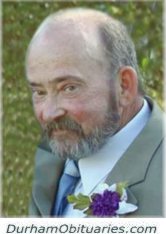 A great thank you to the doctors, nurses and support staff at Lakeridge Health Oshawa.

No Funeral Service to take place.

Memorial donations to the Canadian Blood Services would be appreciated.