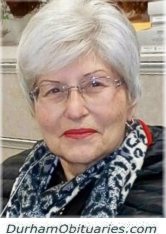 JONES, Heidi (nee Bock) - After a courageous 18-year battle with cancer, Heidi Jones (nee Bock) passed away peacefully at the age of 74 on Wednesday, October 10, 2018 at the Oshawa Lakeridge Hospital.

After high school, she became an Executive Assistant working for large corporations such as the King Edward Hotel, BMW, Volkswagen and the Canadian Vehicle Manufacturers Association.

In 2006 at the age of 62, she retired to travel, volunteer for the VON and the Church, and pursue her hobbies of gardening and quilt making.

Our mom truly loved chatting with friends and family especially her grandchildren, designing her garden and planning/creating new quilting projects.

Family, friends and others whose lives Heidi touched are invited to the visitation at DESTEFANO FUNERAL HOME, 1289 Keith Ross Drive in Oshawa on Wednesday October 17th from 5 to 9 pm (prayers from 5:30 to 5:45).

A funeral mass will be held at Holy Family Catholic Church in Whitby on Thursday, October 18th at 10:30 am.