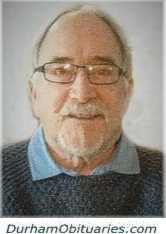 CUSHNAN, James “Jim”  - It is with heavy hearts that the family of Jim Cushnan, announce his passing on Thursday October 18th.

Jim grew up playing Hurley and learning to play the most beautiful music on the banjo and mandolin.

After going their separate ways to start new adventures, they happened upon each other in Toronto, Canada in 1966, and the rest as they say was history.

They married in 1968 and went on to have three children and nine grandchildren. A devoted man of faith, Jim dedicated years to the Knights of Columbus, eventually becoming a 4th Degree Knight. He participated in Bible study classes and loved to teach little kids the rosary with the Rosary Apostolate.

An avid musician Jim played in many bands over the years including the Foggy Dew and The Tinkers. He loved to share his music everywhere he went but especially with his children and grandchildren.

Jim will lovingly be remembered by his family in Ireland and around the world including his brothers John (Isobel), Hugh, Charlie (Moira), sisters Elizabeth (Danny), Belle, and predeceased by his brothers Frankie & Eammon, his sister Rose and sister-in-law Eleanor.

He was a much-loved brother-in-law to the Mulgrew family and uncle to many nieces and nephews.