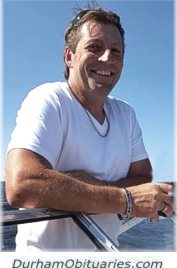 Brent will be remembered for his love of everyone and everything, his passion for life, his amazing carpentry skills and his love and commitment to family.

Cathy and family would like to thank the family, friends and the Community of Whitby Shores for their ongoing support during his difficult and brief battle with colon cancer.

A Celebration of Life will be held at The Lions Club, 500 Clements Road West, Ajax on Friday, November 30th from 5 – 9 p.m., before being laid to rest at a later date with his grandmother, Ann Walsh, in Norris Point, Newfoundland.

Until we meet again “My Love."