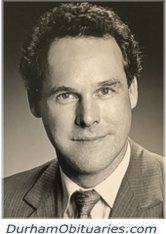 After suffering a spinal cord injury at the family cottage in November of 1996 and living with unrelenting chronic pain, Dad decided to exercise his independence in opting for a medically assisted death.

Although his decision caught many of us off guard, we are all inspired and proud of his strength, endurance, and courage.

Dad grew up in Montreal and Hudson where he attended Selwyn House School and spent his summers teaching swimming at the Hudson Yacht Club. He graduated from Trinity College School and attended McGill and Concordia where earned his degree in Commerce and became a Chartered Accountant.

In August of 1960 he set out on a misty morning and discovered three islands at the north end of Lac Gagnon where he and two of his Kappa Alpha fraternity brothers would spend the next half century building their cottages and sharing a unique and often hilarious friendship.

Stories of capsized cottages, midnight raids, inebriated piano duets of Chopsticks using only toes and an ancient Hoover vacuum cleaner to depress the pedals. These and other miscellany of pranks captivated our young imaginations.

Professionally Dad’s finance and accounting career started at McDonald Currie with stops at Churchill Falls Labrador, Montreal Trust and peaked when he became Vice President and Treasurer of Hudson’s Bay Company. Moving his young family from Montreal to Toronto was not without hardship; leaving behind friends, family members and previous generations with a rich history that had made important contributions to Canada, was not lost on Dad.

Aside from stamp collecting and the various charities that he worked with, Dad did not have many hobbies that weren’t cottage related. He was a self-taught carpenter, sportsman, woodsman, canoeist, tool collector, jazz lover, Gregorian chant enthusiast, naturalist, breakfast lover (especially eggs sunny side up splashed with bacon grease), raconteur, and most importantly patient and kind.

Those that knew him can attest to his strength of character and penchant for listening.

Dad will be missed by his family including his partner Joan Smith; our mum Holly Rankin; his children Stephanie (Jordan Britnell), Malcolm (Heather Rutledge) and Patrick Nobbs (Lee Murphy); his grandchildren Mason and Charlie Fewster; Molly, Rowan, Phoebe and Tiggy Nobbs; and Grace and Percy Nobbs; his step-brother David Wilder and his wife Susan.

We are all thankful for the time we got to spend with him and the lessons he taught us. We love him deeply and will miss him.

The family would like to thank his medical team Dr. Dayal and Dr. Peng, and the staff at Village of Taunton Mills for their care.

Dad has requested a private family service, and if so inclined, donations can be made to the Toronto Rehab Foundation – Lyndhurst Centre (www.torontorehabfoundation.com).