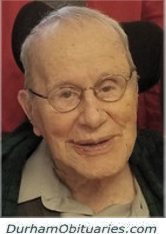 He passed peacefully on October 22, 2018 at the Sunnybrook Veterans Centre, Toronto, where he has resided for over two years.

His daughter Rhea was with him at the time of his passing.

He was predeceased by his wife, Gertrude (nee Brandes) in 2013.

Ed was a bomber pilot in WW II, following which he obtained a degree as a Mechanical Engineer at the University of Manitoba. After working for 14 years for Acme Screw and Gear in Toronto, he returned to Winnipeg where he worked for Versatile Manufacturing, and then Monarch Industries.

After retiring in 1987, Ed and Gert traveled around the world, often to attend Rotary events.

Ed was very proud of his 35 plus years of perfect attendance at Rotary and the thousands of hours he spent as a volunteer at Deer Lodge Centre after his “retirement”. Throughout his life, Ed was an avid gardener and handy man (he could fix anything).

He was an active member of the Presbyterian Church in both the local congregation and serving for many years on the National Board.

The family would like to thank the staff at Sunnybrook Veterans Centre for their care and kindness.

In lieu of flowers please made a donation to a  CHARITY of your choice.