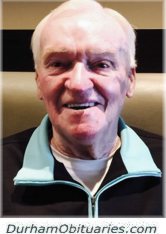 McLEAN, Alexander -  passed away peacefully at Lakeridge Health Oshawa on Friday, November 9th, 2018 at the age of 92.

Dad grew up in Scotland and worked in the grocery business before taking a role in India, managing a tea plantation.

His love of travel, his desire to better himself and his family, led to a move to the French Cameroon Development Corporation, operating food stores. After a brief return to Scotland, Dad and his family emigrated to Canada in 1965. Almost immediately, he began to work for Miracle Food Mart, as a store manager.

Dad was the long-time manager of Miracle Food Mart in Ajax, he also managed locations in Whitby and Bowmanville, prior to his retirement in 1989. After making Bowmanville home for 35 years, Dad and Mum moved to Whitby to take advantage of the waterfront trail and be closer to family.

In his later years, Dad was a fixture on the trail, on his scooter, admiring the wildlife and enjoying the view of the lake.

Dad’s greatest joy was his family, all gathered around the dinner table enjoying good food, good wine, interesting conversation and special times together.

Dad always had a twinkle in his eye and was never shy to share his views.