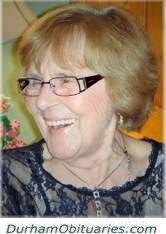 Mom was surrounded by the love of her children and grandchildren during the last days at Thortonview LTC home with the devotion and affection she so generously demonstrated in her 93 years.

She was blessed with 11 great grandchildren.

Mom was born in Bergen op Zoom, Holland in 1925 to Kees and Antoinetta van der Velde followed by siblings Reit and Rinus (deceased).

She married Theo Oortwyn (deceased 1978) where they immigrated to Canada in 1952.The two worked hard to establish and build a life in Canada.

Mom’s work ethic reflected in her taking on jobs such as  Loblaws and most notably as co-owner of Bunny’s Catering where she was a familiar and welcoming face as she often multi-tasked where no job was beneath her Mom’s hands were never idle.

She tirelessly cleaned, cooked for Sunday dinners, gardened and was best known for her exemplary sewing skills which had her on her machine until the early morning hours.

The friendships she grew with her dutch friends, neighbours, many in-laws (Wilma) were life long bonds.  Bob (deceased 2016) came into her life and married in 1985. Together they spent 31 years with the growing family.

Mom’s last years  were a challenge, but in her notable strength, she pursued by demonstrating her love for her family while continuing to engage others in her home at Thortonview.

Our thanks to the staff of Thortonview for their care and compassion during her stay (Hallelujah!)

For those out of town - Tuesday, December 11th 10-11 a.m. followed by a Funeral service at 11:00 a.m. in the chapel. Interment Resurrection Catholic Cemetery, Whitby.

In lieu of flowers, donation to the Canadian Cancer Society would be appreciated.