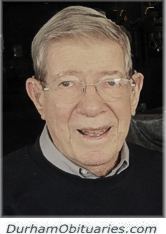 STEWART, James Gordon Stewart - Born April 9, 1926. It is with great sadness that we announce the passing of our father on December 25, 2018.

Born and raised in Hamilton, he moved to Whitby to raise his family. Jim is survived by his wife Margaret (Valleau) and his sons Gordon (Jane) and Jim (Peggy), 7 grandchildren and 8 great grandchildren.

At Jim’s request, there will be no funeral but a Celebration of Life in the New Year.

Many thanks to the incredible staff in emergency, acute care and observation and 9G at Lakeridge Health Oshawa, for their compassionate care of Jim and his family during this sad time.