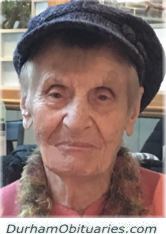 Survived by her brother Johann in Austria, and predeceased by loving sister Pepe.

Mary’s passions included her garden, walking everywhere and her independence, which she learned at a very young age, living on her own since she was 14. She would walk everywhere and took the bus if the walk was too far. She received an award for walking across Canada with her “Sneakers Club” at the Oshawa Centre.

Her favourite passion was getting together with her family.

Mary was notorious at mispronouncing words which led to much laughter amongst the family, she loved to get together with her three “stoogens”  Michael, Billy and Othmar.

Memorial service will be held at the funeral home on Saturday, December 29th at 11 am.

Memorial donations made to a CHARITY of your choice.