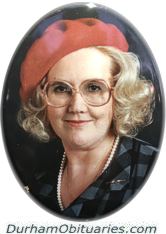 Beloved mother of her son Victor and his wife Shellamar, grandsons Saymone and Kàroly, and her son Robert and his wife Alison, grandson Joshua and granddaughter Mackenzie.

Dear sister of Eva Vaspori, 2 nephews George and David, 3 nieces Ava, Brigitte, and Ashley, along with many great nephews and nieces and a number of relatives in Hungary.

Terézia immigrated with her family from Hungary in 1957. She resided in Longueuil, Quebec until 1960 then moved to Toronto. In 1974, she moved to Oshawa to raise her boys.

Finally in 2004, Terézia moved along with her mother to the quiet, peaceful hamlet of Elliot Lake, Ontario where she looked after her mother.

The most noteworthy part of Terézia’s life was her faith in Jehovah God and the resurrection hope on a global paradise earth as promised in the Bible: Psalms 37:28, Revelation 21:4, Isaiah 45:18.

Donations in Terezia’s memory may be made to support the Worldwide Work of Jehovah’s Witnesses, see jw.org.