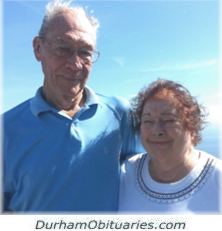 He will be greatly missed by his family and leaves behind his wife, Bella who was his best friend and life partner for 57 years, his two daughters (Deborah and Lynda) and four grandchildren (Michael, Nicholas, Samantha, Ryan).

George lived a charmed life with a loving family and many friends, a number of them made while traveling.

He and Bella were world travellers who courageously explored countries before they became popular including Columbia, Thailand, Russia, Morocco, Gibraltar to name just a few.

George’s number one priority in life was always his family. As a father he never stopped believing, guiding and providing unwavering support to his daughters.

After a successful 33 year career at Ontario Hydro, his favourite role in life became a devoted grandfather who thought the sun and moon rose for his grandchildren. George dedicated his retirement years helping them become the wonderful adults they are today.

He will also be fondly remembered as a gifted storyteller with perfectly timed humour who could entertain dinner guests for hours.

We would like to thank the doctors and nurses on 2W at Ajax-Pickering Hospital for their care and attention during the past three months.

A private gathering of the immediate family will be held at a later date.

In lieu of flowers please make a donation to the Alzheimer Society.