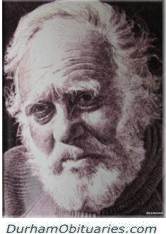 Peter passes, but his works live on.

With three great grand kids, he's had quite an accomplished life.

He was always busy creating - drawing, painting, print making, gardening, wood carving and many other attempts at interpreting life in his own unique style.

He was awesome with color and could make his works sing.

Peter was born in Holland, where he had his basic art training in drawing and composition.

He attended the textile college in Tilburg, where he studied colour and design. Later he worked as a textile designer in his native country.

WWII proved a challenge and a break in Peter's training. He was taken into Germany and forced to work making bombs on a lathe.

He escaped and was hidden in a darkroom (for developing photos). The German officers came in for their own photo's and Peter could hear them say "what's in there?"

The photographer said "we will ruin photographs if we open the door". Peter was smuggled out to the coast of Holland and made it to England, where he joined the Dutch navy.

He also met the love of his life during the war, Marguerite Powel.

He came to Canada in 1957 and soon picked up his brushes and was busy painting the Canadian landscape. A few years later, studying with Jack Pollock, took up monoprinting.

After 25 years of working in oils and printmaking he changed to transparent watercolour.He is one of the founding members of the McLaughlin gallery in Oshawa and a graduate of the Provincial Institute for adult education.

He has served as a juror and gave demonstrations and workshops for many art schools and art groups.

He has won several awards and is in many private and corporate collections. He had 13 solo shows in Canada and Europe and numerous group shows in this country, the USA and Japan.

His favorite subject was Canada, from the Maritimes to the Rockies. His paintings show the strength of the Canadian landscape and his love for his new country.

Online condolences may be made to  oshawafuneralhome.com.