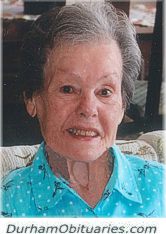 RAYFIELD, Elsie Margaret (Skinner) Rayfield  - At age 94, of Oshawa, Ontario, formerly a long-time resident of Toronto, passed away peacefully at her home on January 19, 2019.

Elsie was born on October 4, 1924 in Sandhurst, Surrey, England.

Elsie married the love of her life, William Charles Rayfield, and immigrated to Canada in 1946 as a warbride where she settled in Toronto and raised theirfour children; Audrey, Priscilla, Susan and Bill.

Elsie was a devoted and lovingmother and after her husband’s passing in 1966, went to work at Eaton’s Department Store to support her family before retiring 25 years later.

Elsie was also very special to the late Klara Polatay and her son Paul, and Esther Horvath (Francis) and their sonAlex. She was very proud of her family and was “Nana” to her 8Grandchildren and “Great Nana” to her 13 Great Grandchildren. She loved family get-togethers,and spent many hours cooking and preparing for her family at holiday gatherings.

Nana was known for her love of sports, and was a dedicated fan, especially of the Toronto Maple Leafs and the Toronto Blue Jays.

A very special thank you to the warm and professional caregivers at Traditions of Durham Retirement Residence for their constant support and loving care of Elsie during her time there.

A celebration of life for family and friends will be held at a later date at MOUNT LAWN FUNERAL HOME & CEMETERY, 21 Garrard Road, Whitby, Ontario.

In lieu of flowers, memorial donations may be made to The Heart and Stroke Foundation of Canada or The Canadian Cancer Society.

Online condolences can be posted at mountlawn.ca.