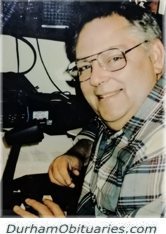 HENRY, Peter Ward  - Peter Ward Henry, 76, of Oshawa, formerly from Beaconsfield, Quebec, passed away peacefully on February 8th, after a brief illness with cancer, at Lakeridge Health Oshawa, with his son Michael by his side.

Born in Town of Mount Royal on January 5, 1943, he was the son of the late Dr. Donald and Phyllis (McVie) Henry.

Peter loved his family cottage at Sunny Point at Bark Lake, Quebec and spent his summers there for most of his life, until selling the cottage in 2007.

Peter shared his curiosity and love of science as a teacher at Lachine High School and Woodcrest Public School, receiving his Master’s of Education in 1984.

One of his favourite hobbies was as a critically acclaimed sound engineer, mixing and producing high quality choir and symphony recordings, through his company, Arundel AVM. He was a ham radio operator, and a past member of the North Shore Amateur Radio Club.

He loved electronics and gadgets, and was very generous with his friends, family and strangers.

He will be lovingly remembered and missed by his son Patrick and partner, Brenda, of Bridgewater NS; Michael and his wife, Elena, of Peterborough, Ont; grandchildren Michael, Aniko and Lev; his first wife, Susan Hicks, Que; brother Paul, Greece, sister Martha and her husband Robert, Calgary and his beloved Bouvier, Genie.

Peter had a close network of neighbours and friends who will greatly miss him as well.

He was pre-deceased by his parents; his wife, Patricia Kazuika; and sister Kit Newhouse.

Visitation will begin at 12 noon with a reception to follow.

In lieu of flowers, donations in memory of Peter may be made to Ontario SPCA or charity of choice. Online condolences may be shared at makfuneralhome.com.