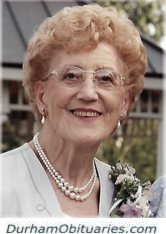 Born and raised in Eltham, England.

She began her career as a switchboard operator at the Woolwich Arsenal post-WWII, and emigrated to Canada in 1951.

Hilda returned to the work force as a Fuller Brush sales woman, winning several high achievement awards in this position.

She retrained herself in the Canada Manpower services and became a long-time employee as an administrative assistant at Ministry of Natural Resources until her retirement in 1989.

As a single parent, Hilda raised her family in Scarborough; she took great pride in her children Lee and Laurie. Trained as a seamstress, Hilda enjoyed creating clothes from designs – and passing this knowledge on to Laurie. She also loved gardening, baking, and making jams.

Hilda spent her last days at Port Perry LTC, where she passed peacefully, surrounded by her son and daughter. Lee and Laurie are very grateful for the care their mom received at both Port Perry LTC and White Cliffe Terrace Retirement Residence.

Messages of condolence can be left for the family by visiting barnesmemorialfuneralhome.com.