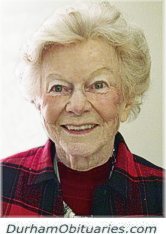 Family members sadly announce the passing of Ruth Langmaid at 91 years of age.

Surrounded by family, with her husband by her side, Ruth died peacefully at Lakeridge Health Oshawa.

She will be lovingly remembered by sons Bob and Bruce (Pauline) and daughters Jane (Bill McKenny) and Nancy McLaughlin (John).

Ruth and her sisters Berniece "Casey" and Jean grew up in Owen Sound. Ruth and Jack settled in Jack's home town of Oshawa, where he established an orthodontic practice.

As well as raising a family, Ruth was involved in social and recreational activities with Jack, notably skiing, sailing and golf. She continued to ski until age 86 and her golf game continued even longer. Ruth also loved to play bridge and read, and she was renowned for her knitting, especially her beautiful hand-knit socks.

She had great circles of friends over the years in Oshawa and in cottage country, specifically at Shadow Lake and Lake Rosseau.

In Ruth’s last year, she and Jack were enjoying life together and meeting new friends at Amica Whitby. In keeping with their special bond, just a week before her death, in their 70th year of marriage, they celebrated Valentine’s Day with other couples at a dinner and musical evening at Amica.

Family would like to express their appreciation to the caring staff at Amica and in the Emergency Department at Lakeridge Health Oshawa.

In lieu of flowers, memorial donations to Lakeridge Health Foundation would be appreciated by the family. Visitation will be held at the OSHAWA FUNERAL HOME , 847 King Street West (905-721-1234) on Tuesday March 19th from 1:00 p.m. until time of Memorial Service in the chapel at 2 p.m.

Online condolences are available at  oshawafuneralhome.com.