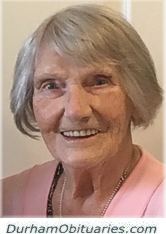 She came to Canada in 1953 with her young son Karsten, and later married William (Bill) Smith in 1956.

Henni’s family want to thank the staff at Amica Whitby for their big hearts and the care provided during Henni’s happy years at Amica.

Henni’s favourite things in life included choir nights with friends, making Spanish coffee for them. She loved waltz music, beaches, dressing with style, the sun on her face and spending time with her grandchildren.

In her honour, buy flowers for yourself or plant a spectacular shrub, stay up too late, buy the nice wine and the good coffee. If you can’t decide which dress to buy, buy both. Make the bonfire a little bigger and maybe smash that ugly lamp that you never really liked. Enjoy your cake and have that extra whipping cream.

Live to be 100 and think of Henni whilst doing any or all of the above.

A Celebration of Life will be held this summer.

Condolences may be expressed online at wctownfuneralchapel.com.