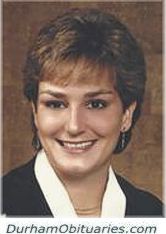 ROSS, Christine Francine  -  Taken away from us suddenly and unexpectedly at home on February 28, 2019.

Christine was born in Montreal to Hermine Couture and the late William T. Ross.

She was the beloved and cherished wife of Willem Van Zwol for over 27 years.

Cherished mother of Alexander, Derek, and the late Evan.

She will also be missed by many nieces and nephews in Quebec and a large family in the Netherlands.

Christine graduated from McGill University with a BScN and worked many years in gastrointestinal research.

Christine had a contagious smile, was an inspiring mother and had an extreme love for the outdoors and spend lots of time camping, hiking, watersports, skiing and exploring nature and the mountains.

Lately Christine spent a lot of time at our vacation home in the hills of the Eastern Townships of Quebec.

She enjoyed life to the fullest, traveled extensively through Canada, United States, Europe and Korea. She loved to experience many different cultures and cuisines.

She is survived by her mother Hermine Couture of Montreal, Quebec, her husband Willem Van Zwol and her two sons Alexander and Derek Van Zwol of Whitby, Ontario.

She was preceded in death by her son, Evan Van Zwol

A private family interment will be held in Lennoxville, Quebec at a later date.

Donations in memory of Christine Ross made to the Sunnybrook Foundation, Hurvitz Brain Sciences Program would be appreciated by the family.