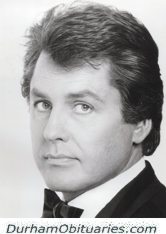 Canada’s handsome smooth-singing baritone and entertainer, passed away peacefully at Lakeridge Health Oshawa on Friday, March 22, 2019, at the age of 83.

Doug grew up in Oshawa with his family where he began singing at the age of 6 at Sunday school and in the St. Andrews church choir.

While working at GM in Engineering, he won a local talent show singing “A White Sport Coat with a Pink Carnation." The rest is history.

He began his television career in the late 50s guesting on CBC’s “Country Club, Holiday Ranch, Swing Easy and the Canadian Hit Parade."

In the 60s, he moved to Winnipeg to star and host the show “Swing Along” where he met and married his late wife Jean (Gray) and began his family.

His big break was singing at the Brooklyn Theatre on the Bell Telephone Hour in NYC, he then signed with RCA Victor where he recorded his first album “A New Star In Town."

He headlined numerous nightclubs and starred in lead roles on “Oklahoma, Bye Bye Birdie, Guys and Dolls, and Brigadoon."

Doug’s favourite time in the 70s was when he had his own television show called “The Doug Crosley Show” on CBC, produced in Winnipeg. In the 80’s he sang and hosted “Stars On Ice” for CTV.

In the 90s he continued entertaining in the USA with big bands from Palm Springs to south Florida while he enjoyed his warmer winters.

Doug’s summer home was in Lakefield, Ontario where he spent the last many years enjoying the view of Chemong Lake with his special lady and partner Mary Elliott.

Doug’s voice was a gift that just kept giving and getting better. He had many friends, extended family and dear colleagues in the entertainment industry.

A special thank you to his home palliative care team and hospital staff on 4F.

Loving father of Nancy, son-in-law Carl, and predeceased by his son Guy. Grandfather of Hannah, Tyrah, Alexa and Mitch.

A Celebration of Life will be held at the  ARMSTRONG FUNERAL HOME, 124 King St.E., Oshawa on Monday March 25th at 3 pm.

In lieu of flowers, donations to the R.S. McLaughlin Cancer Centre or the Salvation Army would be appreciated.

To place an online donation or condolence please visit  armstrongfh.ca.