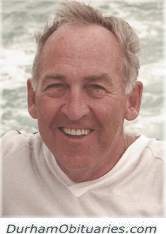 Passed away peacefully at Lakeridge Health Oshawa, with family by his side on Friday April 19, 2019 in his 88th year.

Jack will be greatly missed by his loving wife, Marilyn (nee Leask) of 61 years.

He will be sadly missed by his extended family and great network of friends. Jack was proud to have grown up in the Cedardale neighborhood of Oshawa and maintained his childhood friends throughout his life. Jack was a respected 40-year employee of General Motors as a Tool and Die Maker.

He was an extraordinarily skilled craftsman and continued to work with his hands even after being handicapped by blindness. Jack was noted for his athletic abilities and specially excelled at hockey, baseball, and lacrosse and was a very talented bowler. He loved to fish and hunt, especially with his son and hunting buddies at the family-built cottage on Salmon Lake.

n their retirement Jack and Marilyn enjoyed wintering in Panama City Beach, Florida with their many friends, new and old.

Everyone adored Jack for his kind, courteous nature, his positive outlook, his great sense of humor and his genuine interest in what people had to say. Jack cherished get-togethers with his family whom he loved very much.

Donations in memory of Jack can be made to the Lakeridge Health Foundation, Emergency and Critical Care.

Online condolences can be made at  courticefuneralchapel.com.