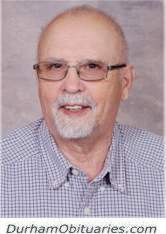 Fab devoted himself to his family and is mourned by his sisters Julie and Gabriella, brothers and sisters-in-law, nieces and nephews, cousins, and extended family and friends in Italy, the US and Canada.

Predeceased by his parents Ennio and Viola, and baby brother Jiuliano.

Fab came to Canada with his family when he was 9 and grew up in Niagara Falls, attending Niagara Falls Collegiate Vocational Institute before studying and graduating in Chemical Engineering Technology at Ryerson Polytechnical Institute.

He was an Analyst in the Drug Analysis Service, Scarborough, Health Canada, before retirement, and a part time Baker at his local Tim Hortons in Whitby until this year.

Fab took great pleasure in working with his hands and was constantly taking on new home-improvement projects, no matter how difficult.

He combined this passion with his love for the outdoors and for teaching others as "Scouter Fab" with First Pickering Scouts, and as a volunteer with Habitat for Humanity Northumberland, where he helped at Habitat's ReStore in Ajax, local build projects, and several trips with Habitat's Global Village volunteers to build in weather devastated areas in El Salvador and Hawaii.

Always with a smile on his face and a silly joke on his lips, he will be dearly missed by the many friends and colleagues whose lives he touched.

As per his last wishes, his cremation has been entrusted to BARNES MEMORIAL FUNERAL HOME in Whitby, and a celebration of his life for family and friends will take place at a later date.

A donation to the Lakeridge Health Foundation to support local healthcare would be greatly appreciated by his family.