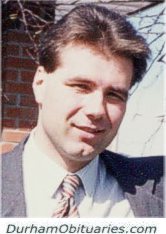 GOREGLAD, Paul John - It is with profound sadness, the sudden passing of Paul J. Goreglad, born January 26, 1963, took place July 1, 2019. He succumbed to his injuries due to a rollerblading accident in the city of Toronto.

Retired from Chrysler in Brampton, Ontario, Paul was an active member of St. John the Baptist Ukrainian Orthodox Church in Oshawa.

Paul, cherished and loving son of Olga Goreglad and now reunited with his father, John Goreglad.

Survived by his brother George, and will be fondly remembered by his nephew Dwayne Goreglad and his wife Karen and his niece Carrie.  Great Uncle to Carly, Raechel, Mason, Avery and Jasper.

Funeral Mass will be held Monday, July 8th at 10am at St. John the Baptist Ukrainian Orthodox Church in Oshawa.

Paul will be peacefully laid to rest at Union Cemetery, 760 King Street West in Oshawa.

It broke our heart to lose you,
But you did not go alone.
A part of us went with you,
the day God took you home.