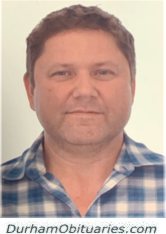 Passed suddenly at the age of 48, at his home on Salt Spring Island, British Columbia.

Born and raised in Oshawa, Ontario, Myron was a beloved and devoted son to Miron Sr. and Justina Caky.

He was a devoted brother to Andrew (and wife Carrie) and Martin and a loving uncle to his nephew, Ethan, and niece, Mia.

He was a beloved grandson and is remembered lovingly by his aunts, uncle, and extended family in Slovakia.

Myron is mourned by many who were touched by his humour, intelligence and kindness, especially by his many lifelong friends.

Though humble, Myron accomplished remarkable things throughout his life.

In 1992, Myron and his high school friends founded the Sunrise Recreational Youth Group for Young Adults with Disabilities.

Throughout the years he remained passionate about the charity’s members and was proud of establishing the foundation on which it operates today.

Myron was an outdoor enthusiast and was especially passionate about cycling and snowboarding. He found good people and formed lasting friendships wherever he went.

In his 48 years, he lived a life of adventure, friendship, and love and will be dearly missed by all who knew him.

Visitation and a celebration of Myron’s life will be held at ARMSTRONG FUNERAL HOME in Oshawa.  Visitation will be Friday, July 26th, from 2-4pm and 6-8pm. The funeral service will be held there at 11am, on Saturday, July 27th, followed by his interment at GROVESIDE CEMETERY in Whitby.