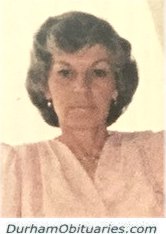 It is with the deepest sorrow that the family announce the passing of their beloved Janet.

She was surrounded by the love of her family when she passed after a valiant battle with COPD.

Janet will be dearly missed by her husband of over 60 years, Victor.

She was a loving mother of Philip.

Adored sister of Aneta (late Neville), Ann (Graham) and Robert (Elaine). Janet will be especially missed by her four legged friend Winston, a Chihuahua, as well as by many neighbours, friends and acquaintances. She will be forever remembered for her generous nature, kind spirit and big heart.

The family wish to extend their heartfelt appreciation to the compassionate nursing staff and PSWs of Palliative Care Unit at Lakeridge Health Oshawa for care and support given to Janet and her family.

Donations will be gratefully accepted for the Canadian Lung Association.

Expressions of condolence may be left at  etouch.ca.