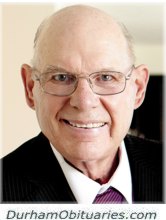 On Friday August 16th, 2019, with his loving wife of 55 years Marilyn and family by his side Don Wilbert Pringle passed away peacefully following a courageous battle with cancer.

Don attended and played sports for O’Neill Collegiate and became an apprentice tool and die maker at 16 and remained a loyal employee of General Motors, Oshawa, North plant for 42+years.

He was an accomplished rugby player with the inaugural Oshawa Vikings Rugby Club (1959), a baseball player, and proud hockey player until the age of 50.

Family and friends will remember Don as the Oshawa General’s number one fan (lifetime seasons ticket holder since 1964, year the Oshawa Civic opened) and a devoted fan of his Toronto Blue Jays, Toronto Argos and Toronto Maple Leafs.

Don enjoyed 43 years of family fun, fishing and sharing stories with the neighbours at Chandos Lake.

Don has shared many special memories with close friends and Bridge partners, Deane and Rob Stuart, Graham and Nancy Finch and Joan and Martin Goverde.

Always a competitor, Don maintained a men’s weekly bridge game for over 50 years and after retirement, enjoyed weekly (multiple)bridge games at the Oshawa Seniors Center.

The Family would like to extend their thanks and heartfelt appreciation to the staff at Lakeridge Health Oshawa Supportive Care Unit (4F) for their compassion and care.

Visitation will be held at 12:30 on Friday, August 23rd at MOUNT LAWN FUNERAL HOME in Whitby, followed by a Celebration of Life service at 2:30pm.

Memorial donations to Hearth Place, Oshawa Supportive Care team or a  CHARITABLE Organization of your choice would be appreciated.

Online condolences and donations may be made at mountlawn.ca.