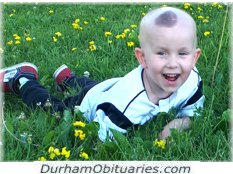 HENDERSON, James Robert Peter "9" - After two years and a courageously fought battle, James passed away at Sick Kids Hospital, surrounded by his loving family on September 2, 2019 at the age of 5.

Adored and precious son of Lee Ann and Sam.

Beloved brother of Jesse and Nathan.

James will be dearly missed by his many loving grandparents, extended family and friends.

Those who knew James will fondly remember him as a "champion bottle flipper and Hot Wheels connoisseur." James always had a smile on his face and would give “two thumbs up” for the many procedures and treatments.

The family feels very comforted that his very short life has touched so many from around the globe - he will never be forgotten.

Expressions of condolence may be left at etouch.ca.