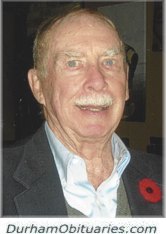 A good man is gone. Lloyd was the Last Man Standing of his cherished family, predeceased by brothers and sisters: Arthur, Jack, Marie, Vernon, Eugene, Evelyn, Martin and Eleanor.

They grew up together on Earl Grey Road in Toronto with a player piano in the parlour.

A devoted husband for 49 years to the late Mary Alice (née O'Hare), he then enjoyed companionship for many years with special friend, Pat Catterall.

Lloyd was loyal. He started work as an office boy at Smith Corona Marchand Ltd. and rose through the company as a travelling salesman, branch manager in Halifax, Nova Scotia, all the way to Eastern District Manager in Ontario at his retirement in 1991.

He was an active parishioner at St. John the Evangelist Catholic Church, and sang in the choir for 28 years. He was an enthusiastic participant in the Whitby Men's Football League until an injury, but continued to play three pitch ball, one-handed, into his eighties.

As a young father, Lloyd supervised Friday night teen dances at Rec Centres in Toronto, then brought the 45's home for the family to enjoy during the week. Throughout his life, he contributed to his community; coaching children's hockey teams, fundraising door-to-door for the Heart and Stroke Foundation, and helping out at St. Vincent's Kitchen. He was also a member of Whitby Knights of Columbus.

The family extends grateful appreciation to Hillsdale Estates staff of Pineridge Place for their compassionate care. A special mention also to extraordinary PSW Teisha and her boys, who could always generate a smile out of Lloyd.

A Funeral Mass will be held at St. John the Evangelist Parish, 903 Giffard Street, Whitby on Thursday, November 21, 2019 at 11:00 am. Reception to follow in the Church Hall.

If desired, donations in Lloyd's honour may be made to the Alzheimer Society or St. Vincent's Kitchen.