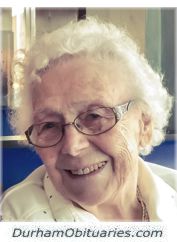 Lena was the loving and beloved widow of Peter Bird (1923-1986), equally loved by all her descendants: sons John (Lorraine Land) and Jeff (Susan Smith), grandsons Matthew (Angelika), Thomas and Peter, great-granddaughters Faith, Veronika and Anita, and numerous other cousins, nieces and nephews.

Lena (née Lavis) was born on October 29, 1923 in a tiny row house in the coal-mining village of Cwmafan, Glamorgan, South Wales.

The youngest child of six, she missed her father, Robert Lavis, through most of her childhood as he worked “on sea.”

After losing her mother, Hannah Maria, to disease when she was 22, Lena dropped out of nursing training and emigrated to Lachute, Quebec, to join her sister, Agnes, and her father.

There she became a loving auntie to her two nieces, Carol and Barbara Scott, and met her future husband, Peter.

She had once vowed she would marry the man who sang the song Starlight Serenade to her.

He sang it, and they married.

An active and joyful member of St. John’s Anglican Church, Port Whitby, for more than 65 years, she was a woman of strong, quiet and thoughtful faith who always tried to do the caring and compassionate thing and expected no less of her sons—whom she taught well despite themselves.

During the Southeast Asian “Boat People” crisis of the late 1970s, she played a lead role in her church’s sponsorship of three Laotian refugees, Nakhon Phanidasak and Soubanh and Soukanh Tonekham, who all came to delight in calling her Mom.

Lena survived a two-year bout of tuberculosis in her 20s, lived a good, long life and was a blessing to many people.

In her last few years she was almost completely blind, but her spirit shone through all the more.

She was a great storyteller, loved listening to music, audiobooks and the CBC Radio series Ideas.

She continued to avidly follow current events, enjoyed lively conversation with family and friends, participated in social activities at her retirement homes (Pringle Creek, Whitby, and Chartwell Wynfield, Oshawa), and always cared for those less fortunate than herself.

Her family thanks all those who have cared for Lena in her latter years, including doctors, pharmacists, church people, retirement home staff, paramedics and especially the selfless and overworked nurses, doctors and others at Lakeridge Hospital.

In lieu of flowers, we welcome donations to the Anglican Primate’s World Relief and Development Fund, or a charity of your choice.

Expressions of sympathy may be made on the funeral home website at  wcfuneralchapel.com .