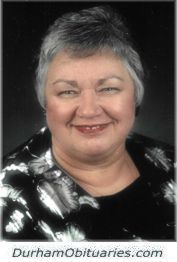 She was predeceased by her parents Noel and Barbara Race.

Fay’s family would like to extend their sincere appreciate to the staff of Hillsdale Terraces for the compassionate care Fay received.

A Funeral Service will be held at All Saints’ Anglican Church, 300 Dundas Street West, Whitby on Friday, January 3rd at 11am.

It was Fay’s wish that those attending her funeral service wear colour to celebrate her life.

If desired, memorial donations may be made to Hillsdale Terraces.