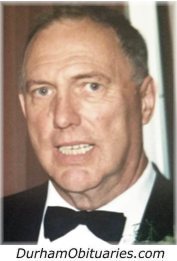 It is with heavy hearts that we share the news that James Meredith Liddell (86) passed away unexpectedly, but peacefully at Lakeridge Heatlh Oshawa on February 4, 2020 with family at his side.

Jim is predeceased by his wife Marjorie (Millican) who passed away two years ago and survived by his three children Susan Teengs (Len), Gary (Leigh-Anne) and Jeffrey (Barbara) and his six grandchildren (Justin, Jordan, Jack, Jeffrey, Jessica and Amanda).

Jim grew up in Montréal, Québec as the only child of Allan and Elizabeth Liddell.

Upon graduation, he proudly worked at Bell Canada for 30+ years.

He and Marjorie met on a blind date, married in 1958 and moved out to the West Island where they raised their family and lived happily for 50+ years.

Jim was always a very active member of his community volunteering his time for a variety of local social events and athletics.  Jim loved youth sports, coaching hockey and baseball for many years as well as umpiring baseball and refereeing football.

Jim’s true love in sports was baseball – playing up to the minor league level, coaching for over 50 years, and watching his grandchildren play.

In 2002, to honour his years of dedication and volunteerism to baseball on the West Island of Montréal, Dollard des Ormeaux named a field (3-Jim Field) at Lake Road Park after him and his two other Jim friends (see inset).

Shortly after retirement from Bell, Jim performed telecommunications consulting work in Asia (Indonesia) and later on in the Caribbean (Antigua).

These opportunities provided him and Marjorie with wonderful travel adventures and memories.

Later on in retirement, Jim worked for 18 years as the McGill football team equipment manager enjoying the opportunity to again work with long-time friends and young people at his beloved McGill.  Jim continued to golf on a weekly basis (Dorval and Whitby) and take trips to Cuba well into his 80s.

Jim was a proud member of the Snowdon Oldtimers Association.  Jim loved his family and his friends – he was very proud of the life he had built and very grateful for the people who enriched his life.

A celebration of his life will be held in Montréal at a later date.

The family wishes to extend a very special thank you to all of the kind and supportive staff at the Wynfield Retirement Home especially nurse Kylie Giroux and the doctors and nurses of the Intensive Care Unit at Lakeridge Health Oshawa who were so very kind and supportive in his final hours.

In lieu of flowers, donations to Diabetes Canada, the Heart and Stroke Foundation, the Canadian Cancer Society, or a local youth sports team in Jim’s name would be appreciated.