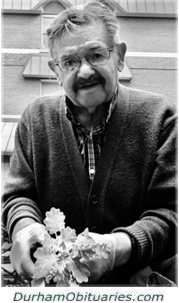 Dmytro Skorobohacz of Oshawa entered into the presence of his Lord and Saviour on Wednesday February 19, 2020 in his 97th year, at (Humber River Hospital) with his family members at his side.

He was one of six children born to Anna and Ivan Skorobohacz and was predeceased by brothers Mychajlo, Wasyl, Semko, Bohdan, and sister Olena.

He is survived by daughter Maria and son John (Angela) and his loving grandchildren Christina (Chris), Kathryn, and Anna (Josh).

He is also survived by extended family (nieces and nephews) in Ukraine and the United States.

Dmytro was an active parishioner at St. George’s Ukrainian Catholic Church in Oshawa as well as a formative and active member of the Ukrainian Cultural Centre (Dnipro) in Oshawa, until his transition to the Ukrainian Canadian Care Centre in Etobicoke in 2017.

Dmytro enjoyed and participated in the cultural programming and various activities as well as continuing to practice his Ukrainian Catholic faith by attending the weekly church services at the Ukrainian Canadian Care Centre.

Aside from his ongoing support and connections to the Ukrainian community, he maintained an ongoing interest in beekeeping and hobby farming; these activities allowed him to stay connected to his formative early years.

He will be sadly missed by family and friends.

In lieu of flowers, the family suggests expressions of sympathy may be directed to one of several charities supported by Dmytro.