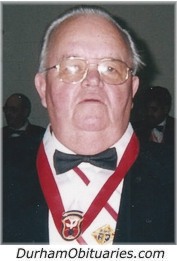 Ron, in his 83rd year, beloved husband of Marian of 61 years.

Dear brother-in-law of Ken Gabourie of Calgary and uncle of Kent MacCarl and Tina Atkinson.

Predeceased by his parents Alice and Bill MacCarl and his brother Vernon and his wife Stella MacCarl.

Ron was an employee of General Motors for 32 years, a member of the Knights of Columbus, the Royal Canadian Legion (Branch 112), a Boy Scout Leader and a Golf Club Fitter.

Under the current situation, the Memorial Mass will be held at St. Joseph the Worker, Oshawa, but postponed until a later date.

If desired, memorial donations may be made to the Society of the Little Flower and condolences may be expressed online at wctownfuneralchapel.com.