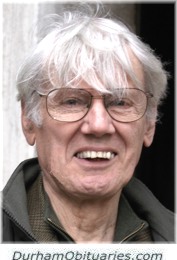 SUGDEN, David Clay  - After a lengthy battle with Dementia, David passed away on March 26, 2020 at Lakeridge Health Oshawa.

Beloved husband of June for over 61 years.

Cherished dad of Kevin and Carolyn. "Naughty grandad" of Dylan, Charlotte and Fraser.

Loving brother in law of Alan and Chris Louden, uncle of Kim, Claire, Dawn and Hilary [and their families], cousin of Carolyn Sanderson.

David will also be missed by extended family in Northern Ireland as well as by many friends, colleagues, air modellers and acquaintances.

He will be forever remembered for his love of model airplanes from an early age. In fact, David represented "the best country in the world", Canada, in many international free-flight model airplane competitions.

He was an aeronautical engineer in the test flight division at Avro Canada and worked on the Avro Arrow!

After the close of the company, David answered his second calling and became a dentist. He and June moved to Oshawa in 1965, where he passionately practised dentistry for over 40 years.

David loved travelling the world with June and enjoyed classical music, often overheard whistling concertos of the great composers as he worked on his model airplanes.

His was a life smartly lived, with a super set of horseshoes. No formal funeral services will occur at this time, although a celebration may be planned for the future.

Donations may be made to Alzheimer Society or the  CHARITY of choice.

Expressions of condolence may be left at  etouch.ca.