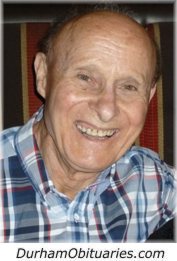 It is with sadness that we announce the passing of Theodoros (Ted) Tyrovolas after a brief illness, on Sunday April 19, 2020 at Scarborough General Hospital at the age of 86.

Proud grandfather of Katarina and Kristen.

Ted was born in Thana, Greece and came to Canada immediately after his tour in the Greek Navy and settled in Kingston, Ontario.

He married his cherished wife (Toula) in 1960 and started a family of three boys.

They were very proud parents of Christos, Di-no and Ted Jr.  They raised their boys with lots of love and attention. He owned several restaurants in his working life in Goderich, Stratford, Ajax and Oshawa. They were suc-cessful in business because of their strong work ethic and love of people.

After retire-ment, they spent most of their time together gardening and taking care of their home.

As a family man, spending quality time with his family and relatives always brought him great joy and he felt very proud of his Greek heritage and its traditions. His two grandchildren, Katarina and Kristen were loved dearly and he made sure he attended their activities and special milestones.

He was a very principled man as he believed in honesty and integrity and had a strong faith in God.  He loved to joke and laugh and was always smiling around people.

He will be sadly missed by his family, friends and relatives and his memory will be eternal in the many people he touched.

A private funeral service will be taking place on Wednesday April 22 at 1:00pm.

In lieu of flowers, memorial donations to Parkinson Canada or a  CHARITY of your choice would be appreciated.