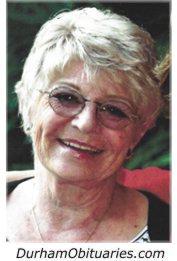 Liz will be sorely missed by Heather Newberry, who she considered the daughter she never had and a godsend during her illness.

Having resided on several islands and continents, she cherished her travels and the friends she met.  Upon returning home Liz devoted herself to Operation Migration and the people drawn to their mission.

Due to Arrangements entrusted to  W.C. TOWN FUNERAL CHAPEL , Whitby. Memorial donations to the Oshawa Lakeridge Hospital Cancer Centre would be appreciated.  Interment will be at Oshawa Union Cemetery.