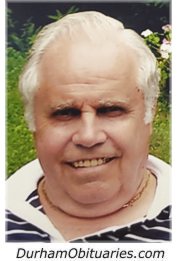 With sadness we announce the passing of Albertus (Ben), 10 days after his 85th birthday at the Sunnybrook Reactivation Care Centre following a very lengthy stay.

He is predeceased by his wife Elfride and survived by his children Marilyn (Federico), John (Yvonne), Gary (Kelly) and adopted daughter Samantha (Kyle).

Born in the Netherlands, he immigrated to Canada with his parents and arrived in Halifax, Pier 21 aboard the s.s. Groote Beer in October 1953.

They lived in Toronto for a short while and later built their own house on Glendale Drive in Pickering, Ontario where Elfride, also from the Netherlands, joined them.

Ben lived in the Netherlands, Canada and U.S.A. over his life.  While in Canada, Ben was employed for 35 years by a large stockbroker as manager of Mutual Funds, Security Reconciliation and Internal Audit departments.

He also served two terms on a Catholic School Board as chairman as well as on a negotiations committee.

While living in the U.S.A. he was self-employed for a time and later worked for Cheatham County Health Service Center in Tennessee.

Special thanks to the staff at Sunnybrook Bayview, Wellesley and RCC (Church Site) locations for caring for our father.

Because of Covid-19, there will be a private family service and burial. A celebration of life will be held at a later date once restrictions are lifted.

If desired, in lieu of flowers, a donation made to charity of choice is appreciated.

Messages of condolence and memories can be shared with the family by visiting barnesmemorialfuneralhome.com .