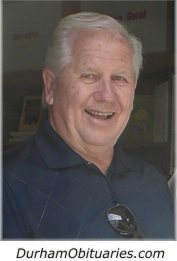 It is with great sadness that the family of Robert John “Bob” Debosky announces his passing on May 28, 2020, shortly before his 82nd birthday.

Bob will be lovingly remembered by his wife of 55 years Patricia (Briggs), and his children Gail (Chris), and Brian (Denise).

Bob was predeceased by his identical twin brother, Bernie (Una), and his parents, Helen (Yarmola) and Joseph Debosky.

He will be dearly missed by his brothers-in-law and sisters-in-law, cousins, nieces, and nephews across the Debosky and Briggs families.

Bob grew up in Whitby, where he and his brother were affectionately called the “Debosky Twins.” He worked on the “kids’ line” at General Motors in Oshawa before leaving for a brief period to take on various jobs in the Bahamas, Hamilton, Chatham, and Sarnia. He eventually returned to General Motors where he worked 42 years before retiring from the Truck Plant in 1999.

Bob met his best friend and future wife, Patricia, at a dance in Whitby in 1963. They were married the following year and made Oshawa their home.

Bob’s outgoing and friendly nature allowed him to easily form friendships, many of which he kept for his entire life.

He enjoyed celebrating his friends’ successes as well as the successes of their families. He loved the banter at his weekly breakfasts with friends, and his patience and good humour made everyone around him feel at ease and welcome.

Friends and acquaintances alike will remember him by his contagious smile and congenial nature.

Bob was an avid skier, a passion he shared with his children and grandchildren. He loved travelling (Australia, New Zealand, and Estonia were some of his favourite destinations), spending time at the cottage in Fenelon Falls, and tackling a good brainteaser. He could fix anything and was often found tinkering in the garage on his latest project. He was also a fixture at his grandchildren’s sporting events in both Whitby and Oakville.

Bob’s family wishes to thank everyone who aided in his care, notably the nurses, doctors, staff and volunteers at Lakeridge Health for the compassion they provided.

He will be laid to rest at Resurrection Cemetery.

Due to the Covid-19 pandemic, the family will take care of immediate arrangements through BARNES MEMORIAL FUNERAL HOM and will host a Celebration of Life at a later date, when we are all able to gather together.

In lieu of flowers, we ask that donations be made in his name to the Canadian Cancer Society or Lakeridge Health Foundation.