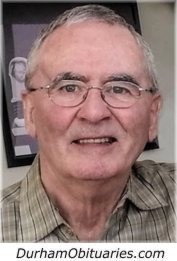 McCARROLL, Norman James - Passed away peacefully at Extendicare Southwood Lakes in Windsor on Wednesday, June 3rd, 2020 at the age of 83.

Beloved husband of the late Marjorie.

Son of the late James and Edna McCarroll.

Norm had the gift of touching so many lives. Those who knew him understood the magnitude of his heart and character.

Born in Scotland, he immigrated to Canada at age 21. He was married to Marjorie for over 39 years until her passing in 1998.

He devoted over 30 years of his career as a teacher, guidance counsellor, and sports coach at Courtice High School and summers coaching soccer.

He spent his retirement years volunteering at the Boys and Girls Club of Durham-Eastview, working out, and telling jokes to his crew at the local Timmies.

No formal services are planned at present due to travel restrictions. In the near future, a Celebration of Life Memorial will be planned.

In lieu of flowers, donations in memory of Norm to the Boys and Girls Club of Durham or the Heart and Stroke Foundation of Canada can be made through McINTOSH-ANDERSON-KELLAM FUNERAL HOME LTD., 152 King St. E., Oshawa (905-433-5558).

Condolences can be shared at makfuneralhome.com.