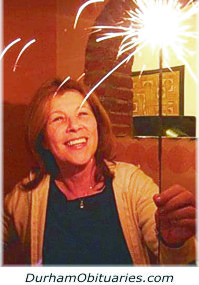 It is with great sadness that the family of Mary Lorraine Norton (née Corbett) announces her passing on Wednesday, August 5, 2020.

Born in Toronto, Mary was the eldest of six siblings.

A loving mother, grandmother, aunt, and a friend to many, Mary was known for her brilliant mind, activism, charity, love of music, her excellence in the field of human resource management, and her beautiful smile.

A nurturer from a young age, Mary cared for her younger siblings when she too was but a child. Despite many childhood hardships and often missing school to help out at home she excelled as a student.

As a young woman, Mary worked as a legal secretary in the law firm Blake, Cassels, and Graydon, following her secretarial position in the RCMP. Shortly after her wedding in 1969 at St. Michael's Cathedral Basilica, Mary brought her young brothers to live with her and her new husband, Douglas Earl Norton, raising all three to adulthood.

The adventurous young couple, with the boys in tow, moved to Roseneath in the township of Alnwick/Haldimand, where Mary ran a general store and moved into an old schoolhouse.

At this time they were elated to welcome their first son, Douglas Craig Norton. Mary and Doug had always dreamed of growing a family, and upon moving to Whitby, Ontario, they were once again overjoyed to welcome, Matthew Corneilius Norton, and then Jennifer Eylene Norton.

In Whitby Mary and Doug made many close friends who shared their love of adventure. Together, they enjoyed ski trips to Québec, Vermont, and New York State.

In 1983, Mary founded Marando Corporate Services. She ran her new business from home so she could be with her children when they were small. Always pursuing knowledge and driven to hone her skills, Mary returned to school in her forties to attend York University.

Stretched for time and resources, Mary persevered and received a Bachelor of Administrative Studies, graduating with honours. She later received her HRPA designation and became president of the HRPA Durham Chapter.

During her lifetime, Mary supported various charities and sat on the board of many of them. She dedicated years of volunteerism to the Lung Association, Development and Peace, and as a bereavement counsellor.

Her home and heart were open to many who needed it and lived with her during difficult times in their lives. Mary sponsored refugee families to come and find new homes in Canada, who became dear friends.

Despite her physical challenges in the last years of her life, Mary remained active in her community, a choir member in Shout Sisters, a mentor in the Durham Chapter of the HRPA, and as a parishioner at St. John the Evangelist Roman Catholic Church.

Before her passing, Mary had hoped to become an advocate for the Canadian National Institute for the Blind.

She will be missed greatly by her loving partner Frank Whittington.

She will be missed by Douglas Earl Norton, Cara Bianca Patik, Aleisha Macdonald, and by Scott McGovern and the entire McGovern family.

She will forever be in the hearts of her children Douglas Craig Norton, Matthew Norton, and Jennifer Norton, and her beloved grandchildren who held a place for her in the centre of her heart, Caia, Khalen, and Edie.

The family asks that friends and relatives donate to the CNIB or The UN Refugee Agency in remembrance of Mary in lieu of flowers.