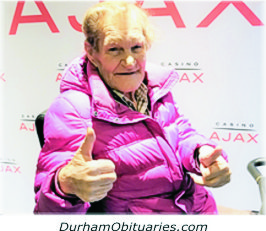 Born in Australia, only his cat and a few people made it past his gruff exterior to know a positive, upbeat man who just liked to have a laugh.

Most conversations involved details of John’s crazy antics that were meant to cause trouble.

You’d probably hear John shout “Let the buggers come and get it!”, and the story would end with “But Lovie…” as he tried to convince you that his scheme was necessary.

John enjoyed watching 1920s gangster movies, saying he should have been a gangster because he’d look good in the hat!

He also enjoyed sailing & going to the casino.  John would bet on just about anything and never shied away from a friendly wager with his early morning coffee buddies at the nearby Tims.

John appreciated the help provided by his neighbours & all the PSWs that cared for him, especially those at Community Care Durham.

Service and burial will be held at a later date.

In memory of John, and his love of cats, donations can be made to the Durham Region Humane Society.