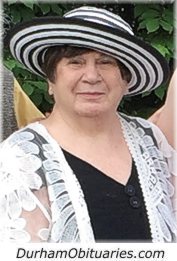 During the early morning of August 27, 2020, Terasa Jane Gizelle (Tourangeau) Fraser died in her sleep of natural cause at her home in Brooklin, Ontario.

Terasa has left behind many nieces and nephews and their children in turn.

As the eldest, she kept alive the family’s ancestral Métis heritage through the stories and philosophy given to her from her Mere Mère.

Terasa was a poet, avid letter writer and fine artist who always included singing in French and English in her classroom. She loved to sing.

A caring person of considerable talent in the field of teaching, Terasa’s career began with her care and guidance of sisters and brothers that self-determinately transformed into a life long journey upon graduating from the Ottawa Teachers College in 1957. She left full time teaching with the Durham Catholic District School Board in 1996. Terasa was certified in good standing and periodically taught, only officially retiring, in 2008.

Her career as a classroom teacher included the role of acting Principal at the initial opening of St. Leo Catholic School in Brooklin and worked for many years as primary support with students with special needs. Elected to the OECTA Durham Unit executive and recipient of the unit’s President Award in 1986, Terasa’s most treasured professional achievement was having former students take the time to stop and remind her of their fond classroom memories.

Her passionate and innovative teaching style could be described as ahead of its time; filled with fun and active holistic methods. She often expressed a child based approach to learning as evident by the claim to have achieved three university degrees named Lisa, Billy and Bobby.

Always supportive, Terasa had an unending belief in the potential of her children and grandchildren, and future generations’ ability to make a better world. Terasa selflessly supported family and extended family struck with cancer or life threatening health emergencies during retirement.

As someone who taught through example she helped organize the first Brownie pack in Brooklin, Brooklin Kinettes and could be found knocking on doors in Brooklin seeking donations for the MS Society of Canada, Kidney Foundation, Heart & Stroke Foundation and Denise House.

Her compassion for the marginalized made fundraising for the St. Francis leprosy organization especially close to her heart. She demonstrated to all who knew and loved her the example of unconditional service to those in most need.

Her death on the feast day of Saint Monica shares the Passion at the foot of the cross as witness to suffering and hope in the resurrection. Terasa will be buried at St. Mark’s Catholic Cemetery in Prescott, Ontario.

An opportunity to share a memorial gathering to honour Terasa’s life will be held at a later date in Brooklin, tentatively planned for March 4, 2021, contingent upon Covid-19 public health and safety.

News publications and social media will announce the invitation in the new year.

Condolences may be shared at BARNES MEMORIAL FUNERAL HOME, Whitby.